In the real world, when you hear two sounds at once, what you’re hearing is the combination (in the “+” sense) of the two noises. If you put five hundred drummers in the same room and, avoiding the obvious drummer jokes for now, told them all to play, you’d get drummer 1 + drummer 2 + … + drummer 500 (also bleeding ears).

With digital audio though, the volume doesn’t go up to oh-god-please-make-them-stop – it’s limited to a small dynamic range. 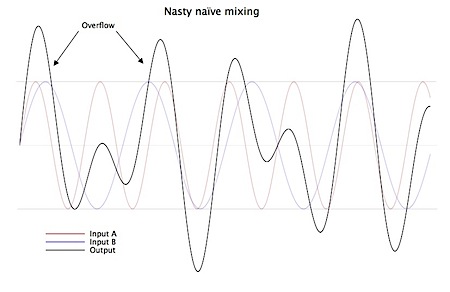 So, digital mixing actually requires a little thought in order to avoid overflowing these bounds and clipping. I recently came across this when writing some mixing routines for my upcoming app Loopy 2, and found a very useful discussion on mixing digital audio by software developer and author Viktor Toth.

The basic concept is to mix in such a way that we stay within the dynamic range of the target audio format, while representing the dynamics of the mixed signals as faithfully as possible.Note that a simple average of the samples (as in, (sample 1 + sample 2) / 2) won’t accomplish this – for example, if sample 1 is silent, while sample 2 is happily jamming away, sample 2 will be halved in volume.

Instead, we want to meet three goals – assuming signed audio samples, the standard format for Remote IO/audio units on the iPhone/iPad, which can range from negative, through to zero (silence), up to positive values.

If we’re talking about signed samples, MIN…0…MAX, this does the trick:

This lets the volume level for both samples remain the same, while fitting within the available range. 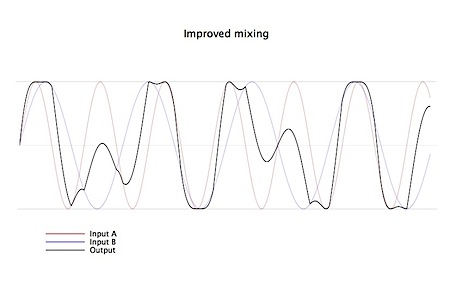 Here’s how it’s done on iOS:

Update: A reader recently demonstrated that this technique can introduce some unpleasant distortion with certain kinds of input — as the algorithm is nonlinear, some distortion is inevitable (see the sharp points on the waveform where the condition switches over). For the kind of audio I’m mixing, the results seem to be perfectly adequate, but this may not be generally true.

Update 2: Here’s an inline function I put together for neatness: