Seeking a more sensible existence: The start of a journey

Monday to Friday (And Most Of Saturday) Zombies 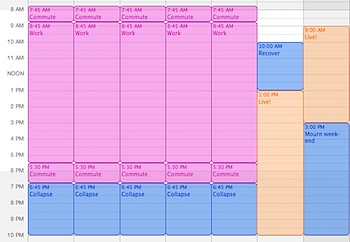 The 9-5-plus-preparation-and-commute, five-day-a-week, living-for-the-weekend lifestyle is one I’ve become increasingly unimpressed by, particularly after meeting my partner Katherine three years ago and realising that life has so much more to offer (mostly, West Wing and Indian food delivered). Not so long ago I came to the decision that it just wasn’t for me; that living a balanced life was too important. If there’s one thing I’ve learned from my pretty-easy-going PhD (and there may only be one thing, aside from the less comprehensible your writing is, the smarter you must be), it’s that I don’t want the big career I planned for. I just want to enjoy my life with Katherine, see the world, create awesome stuff, and do what I can to help some other folks along the way. I think I’m fortunate enough to have the ability to give it a shot.

Emailing with a new visitor to the blog, Charley, gave me the idea of focusing a little more on this journey towards true freedom and independence – the merging of career into lifestyle (not the other way around). This is a bit of a career ‘holy grail’ to many of us – at least, it is to me – and while it’s mostly for my own benefit, writing about my efforts might make for a moderately interesting story arc, and give this blog a little direction.

This will be a story about indie software development, the amazing, wonderful and supportive community that is the Mac world, the awesome marketplace that is the iPhone App Store, travel, play, hard work and hopefully quite a bit of luck.

Now is also not a bad time to begin, as we are rapidly approaching the beginning of our true journey: An ‘unbounded’ trip to Europe. This was a plan that seemed to make itself – neither of us remember a conversation where it was decided, but here we are, four-and-a-bit months, and nine thesis chapters, off flying away to London.

We have no intention of staying in any one place for long, and we have no end date in mind – while we have a 12-month flexible return ticket, we aren’t expecting to use the return flight. It’ll mostly be us, a campervan, a MacBook Pro and wireless internet access for as long as we can make the money keep happening, assuming the global economy doesn’t fall to pieces entirely (thanks, market-which-knows-best!).

One of the big enabling factors – and thus, a risk factor – is a decision to make a career building and selling Mac and iPhone software, one which has only just begun – hence the adventure. This is my holy grail career, and one I was cautiously optimistic about, but the success of which I could never predict. 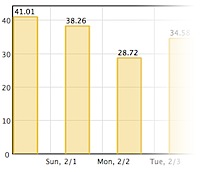 The release of Loopy, my first iPhone app, has me feeling quite hopeful. Despite a number of inhibiting factors – my inexperience and inattentiveness to promotion and the limited target audience, for example – the app has brought in an average of $450 AUD a week, over the almost-two-months since it went to market. With some more time – that is, more than zero – spent on promotion, and some more time put in to continue making it a better product, Loopy’s sales will hopefully be enhanced further.

The real test for whether this can be a viable, stand-alone career, is whether earnings are sufficient for support while developing the next application. There’re no shortage of ideas for applications, but it’s only possible to keep building while the money’s there. As it is, $450/week is unlikely to be sufficient for European living expenses. I suppose only time will tell whether having a few additional apps on the market will do the trick.

The next app, Journeys, which will emerge soon enough, will be the next interesting test (and the one after that will be freakin’ awesome, I promise).

So, let the adventure begin.