‘symbolicatecrash’ is the Developer Tools utility which replaces all those meaningless addresses from crash logs with actual symbol names and source code references. It lives at some obscure folder within /Developer – use find to dig it up and symlink it into /usr/local/bin if you wanna use it conveniently from the command line.

Anyway, after plenty of frustration, I noticed some chatter about the damn thing being busted in Xcode 4. Figures!

There’s an alternate third party version on GitHub, but this didn’t really help me – I still got inscrutable errors, so I took a look at the original.

The version that comes with Xcode 4 appears to have some problems distinguishing, say, an iPhone Simulator build of the app from a native build sitting in the Archives folder. I’d just see an error about otool and some binary living in the iPhone Simulator folder.

Digging into the errant symbolicatecrash source, I noticed that the code that finds the executable path tests each candidate using otool, but doesn’t seem to be able to comprehend the output from otool caused by running it on the wrong architecture.

So, replacing the rather unhelpful ‘die’ statement on line 323:

With a “No, it ain’t this executable” response:

…solves the problem immediately. Now I can drag crash logs straight into the Organizer in Xcode, and it’ll symbolicate correctly.

Objective-C + Cocoa on the Command Line

Sometimes there’s just one tiny snippet of Cocoa code that you want to test — maybe to find out the output of NSDateFormatter for various cases, testing out some text replacement routine, or testing out some image drawing code.

It’s often too much trouble to create a new XCode project and set up the framework to do one simple test, which is why I put together this little shell script that lets you run Cocoa code from the command line:

You have full access to all Cocoa libraries, and in iOS mode, access to most iOS stuff too, straight from the command line.

Update: This is now available as a GitHub project

Getting Data out of the iPhone while Debugging

Here’s a utility I whipped up quickly to save out a file from a hex string, as from [NSData description] — kinda a reverse hexdump.

While doing some debugging, I realised I needed to visualise an intermediate UIImage from the iPhone’s camera. Not being able to use the simulator, and thus be able to write to a file easily, this was my solution: po UIImageJPEGRepresentation(photo, 0.8) to print out the data as a hex string, then copied it to the clipboard, saved it as a text file, and used an NSScanner to scan in each int, fix the endianness and write it out as a file.

Insane? Maybe, but it did the trick.

iPhone debugging tip: Breaking on exceptions and reading their content

Just a quick one: This may be obvious to many devs, but it’s worth noting. One common and useful debugging technique is breaking on exceptions, so that you can see exactly where in your app’s flow a breakpoint occurs.

This can be done by adding -[NSException raise] and objc_exception_throw to your breakpoints list.

Once an exception happens, you can then check out the exception itself to see what went wrong. The approach varies between platforms. If you’re in the simulator (or any Mac OS X app running on Intel), the exception will be stored in the $eax register. Take a look by typing: 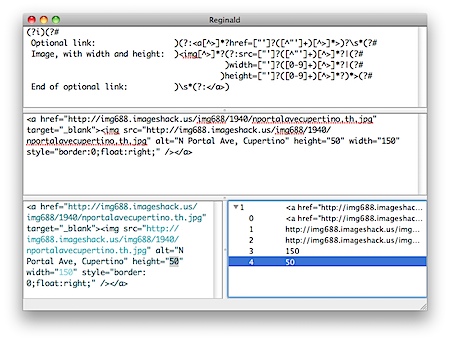