A much more polished demo will be forthcoming once the few remaining software glitches are dealt with.

Loopy, my live performance application for iPhone, has reached the beta testing stage. There are a few minor issues outstanding, but the application is almost ready to hit the App Store. Stay tuned, folks, this is going to be awesome.

Please, let me know if you’d like to have a sneak peek at the application – the more testers the better, and you will have much gratitude from me. You’ll need an iPhone running version 2.1 or later.

I’ve had nasty old time trying to get some audio stuff going on the iPhone, no thanks to Apple’s lack of documentation. If you’re an iPhone developer interested in getting RemoteIO/IO Remote/whatever it’s called working on the iPhone… Do I have good news for you. Read on.

This will only be of interest to a very small minority, but for those of us who have used Core Audio and come across error -66632 in all its glorious undocumented-ness, this is a helpful note.

The error occurs when using AudioQueueEnqueueBuffer. It happens when one tries to enqueue a buffer when the queue in question is no longer running.

Wrap the AudioQueueEnqueueBuffer in a statement that checks to see if the queue is actually running, as in the SpeakHere/SpeakHear (depending on where you look) example. Something like:

..Should do the trick.

Twinkle from Tapulous is an iPhone Twitter application with a twist – it uses location information, to introduce local social networking, and supports photos, a great extension to the standard Twitter recipe.

Twinkle handles photographs by uploading them to Tapulous’ server, then appending a ‘snipurl’ to the Twitter message which points to a page displaying the image. That works fairly well, but wouldn’t it be nice to actually see images inline, when viewing Twitter posts?

I used to manually choose the tracks to sync to my iPod Nano, but now I have 7-something gig to play with on the iPhone, it’s a bit too much. Instead, I use smart playlists to select which tracks to carry with me.

Two standard playlists, ‘iPhone Selections’ and ‘iPhone Exclusions’ allow me to specifically choose or disallow tracks to go onto the iPhone. Then, a smart playlist called ‘iPhone Inclusions’ looks like: 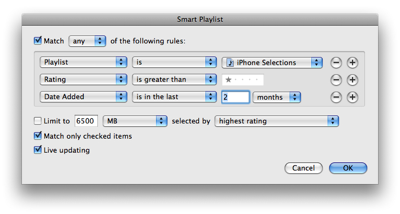 Watch that ‘any’ selection in the top drop-down – a bug in iTunes resets it to ‘all’ every time you bring up the dialog, so you gotta reset it every time.

Finally, a smart playlist called ‘iPhone’, which is the one that is selected to be sync’d, looks like:

That makes sure that tracks I manually choose are copied over, and the rest is automatically selected by rating and the date added (ideally).

The one caveat is that because you can’t select more than one sorting criteria when limiting to a certain filesize in the smart playlist, you can just choose either to sort by add date – which means you’re guaranteed to get that great new album copied over – or by rating, so that you’re gunna get the best tracks. Not both, unfortunately, unless you limit the ‘iPhone Inclusions’ smart playlist too (but that means you won’t necessarily fill up the iPhone if you have lots of exclusions that would otherwise be included).

Other than that, it works quite well – I haven’t yet had a moment when I’ve missed anything on the iPhone.