I’m often having to grep through various iOS frameworks in search of error codes that appear (“What the bloody hell does -10867 mean?”). This can be a bit annoying – especially while working with Core Audio – so I put together an Alfred workflow that does it for me.

Here it is – type “hs” (short for “header search”) then the text you want to search for, and it’ll give you matching results. Hit enter to open that file:line combination in Sublime Text, or edit the action script to work with the editor of your choice.

I’ve recently been working on a static library for distribution to other developers — Audiobus — and I need to include a couple of graphical resources with the distribution. The usual solution to this is to include the resources separately in a bundle, and require the user to drop them in to their project along with the static library.

I thought I’d see if I could make the process just a little neater, and successfully devised a way to compile the images straight into the library, so the distribution remains nice and clean — just the library itself and a few header files.

Now, I can pop image resources into a folder, and after compiling, access them within the static library with:

It automatically handles “@2x” Retina images (although it doesn’t currently do “~ipad” versions).

The magic is in a shell script which uses the xxd hex dump tool to create C code that represents the image data as a byte array, then creates around it a set of utilities to turn those arrays into UIImages on demand.

Along with it is a couple of template files — a header and implementation file — that describe the format of the derived code.

Finally, a little tweaking of the project in Xcode (with a brief foray into a text editor to work around some Xcode shortcomings) puts it all together. 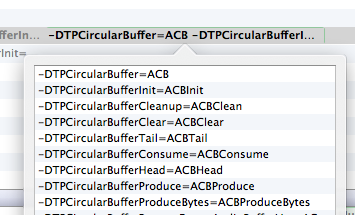 I’m working on two projects right now that have static library products, to be given to other developers to use in their projects: Audiobus and The Amazing Audio Engine. In both cases, I’m making quite heavy use of my circular buffer code, TPCircularBuffer, which would result in duplicate symbol errors if the static library were linked with another project that used it.

In case the solution was useful to others, here’s how I worked around it: Use the preprocessor to rename the symbols automatically during the build phase.

This is done by adding a series of -DOldSymbol=NewSymbol flags to the ‘Other C Flags’ build setting – like -DTPCircularBuffer=ABCircularBuffer, for instance. 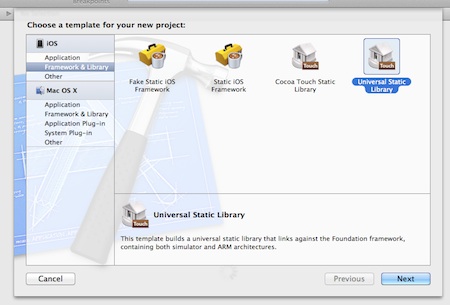 ‘symbolicatecrash’ is the Developer Tools utility which replaces all those meaningless addresses from crash logs with actual symbol names and source code references. It lives at some obscure folder within /Developer – use find to dig it up and symlink it into /usr/local/bin if you wanna use it conveniently from the command line.

Anyway, after plenty of frustration, I noticed some chatter about the damn thing being busted in Xcode 4. Figures!

There’s an alternate third party version on GitHub, but this didn’t really help me – I still got inscrutable errors, so I took a look at the original.

The version that comes with Xcode 4 appears to have some problems distinguishing, say, an iPhone Simulator build of the app from a native build sitting in the Archives folder. I’d just see an error about otool and some binary living in the iPhone Simulator folder.

Digging into the errant symbolicatecrash source, I noticed that the code that finds the executable path tests each candidate using otool, but doesn’t seem to be able to comprehend the output from otool caused by running it on the wrong architecture.

So, replacing the rather unhelpful ‘die’ statement on line 323:

With a “No, it ain’t this executable” response:

…solves the problem immediately. Now I can drag crash logs straight into the Organizer in Xcode, and it’ll symbolicate correctly.

Oddly, iOS doesn’t provide any OpenSSL implementation at all — If you want to do anything with crypto (like checking signatures, checksumming, etc.), you have to build in the library yourself.

I came across a great XCode project wrapper for OpenSSL yesterday, by Stephen Lombardo. This is an XCode project file that contains a target to build OpenSSL from source, and works with both Mac and iOS projects. I made some modifications to it, in order to make it work by just dropping in the OpenSSL source tarball, without having to dirty up your source tree with the extracted OpenSSL distribution.

Here’s how to use it:

Then, you can just import and use as normal (#import <openssl/dsa.h>, etc).

Unit testing and coverage with XCode

There are several great resources out there on how to incorporate unit testing into XCode projects. It’s all built into XCode now, and it’s fantastic.

I just got coverage working too, thanks to a useful article at SuperMegaUltraGroovy on how to use code coverage with XCode. There were a couple of caveats that I thought I’d share, though.