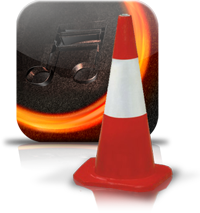 Loopy has been generally successful in the 3 weeks it’s been on the market, and I’ve received many useful suggestions from users, as well as lots of positive feedback:

“What a fantastic app. It is entirely intuitive in use (although there is a very neat video tutorial) and is just the most wonderful fun.Be the first to write a bit of music using extant environmental sounds; loop them and then bung them wirelessly into your Mac (Or Windows) DAW for that final bit of tweaking.Or just sit there humming. Or plucking. I said plucking.This is a beautifully written application.Go. Have fun!”

“Great app! By far the most useful multitrack on tis appstore (yes I have tried them all) in spite of some UI niggles that I am sure will be ironed out (such as the miniature glowing LOTR icons/buttons), very excited for how this app will evolve…”

“By far the most useful multitrack recorder for the iphone.”

LOTR icons, you say? One loop to rule them all…

The most demanded features so far have been:

I’m in complete agreement that these would be useful features, and will be working to include them all in the next release of Loopy.

I am currently engaged in putting together the next iPhone App, which should be completed over the next few weeks. Then, back to Loopy.