I have iTunes and my iPhone configured to sync tracks automatically, without requiring manual intervention. Smart playlists, coupled with my application, Autorate, pick my favourite tracks, and make sure they’re on the iPhone. I previously wrote an article on my iTunes playlist setup; this draws on that prior setup, but this is slightly more refined.

Like the prior setup, I have two standard playlists: iPhone Exclusions and iPhone Selections, which allow me to manually include or exclude tracks.

This three-stage process is necessary to obtain the correct AND/OR logic to correctly exclude tracks, and to ensure selected and recent tracks are always included.

The first playlist simply grabs the top 12 GB of tracks that are not manually excluded. If you’re not using Autorate, you can substitute ‘highest rating’ with ‘most often played’, or experiment. 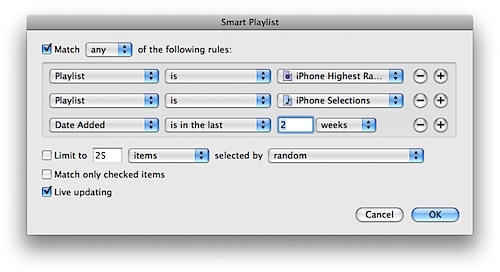 The next playlist grabs the result from the last one, and includes the manual inclusions from the ‘iPhone Selections’ playlist, as well as recent tracks. It grabs tracks from the last two weeks, as they are typically not yet rated competitively with older tracks that have been played more, so it levels the playing ground somewhat for newcomers.

The final playlist takes the result from the last one, but excludes any tracks from the exclusions playlist.

We then set the final playlist as the playlist in iTunes to sync with the iPhone.

Note that due to some limitations in the ‘Limit’ functionality of smart playlists, it isn’t actually possible to provide a hard file size limit, while guaranteeing that manually selected tracks and most recent tracks are included. The only way I can see this happening is if one can somehow prioritise matching rules for the limit.

Consequently, I sometimes get warned about there being insufficient space: In that case, I manually exclude some more tracks, remove some manual inclusions, or decrease the 12 GB limit in the smart playlist.

If anyone has any suggestions, I’d love to hear them.