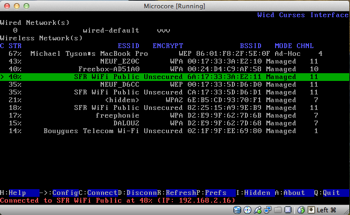 The virtual appliance is set up by default to run the RTL8187 device using ndiswrapper, but the standard wireless drivers package is installed, and should automatically work with another adapter. If not, let me know and I might be able to assist.

Next, download the Microcore Router virtual appliance that I put together (it’s 45Mb). This is set up for use with Microcore Linux, and contains:

Finally, download the Microcore live CD image (the virtual appliance was set up with Microcore 3.8.4 – if you wish to use newer versions, you’ll also need to update the extensions, but you’re on your own there.). 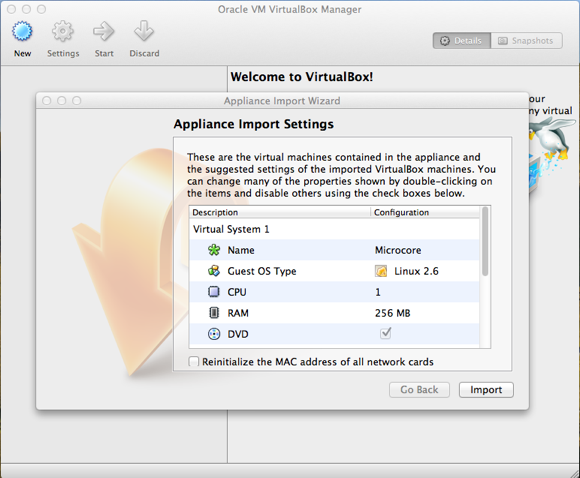 Next, we need to create a virtual network interface to link the guest virtual machine, and your Mac. Open VirtualBox preferences, and click the “Network” tab. Click the “+” button to create a new host-only network, and enter the settings below (192.168.22.2, netmask 255.255.255.0). Click the “DHCP Server” tab and make sure it’s disabled, then click OK. This virtual interface is already selected for use within the VM’s settings. 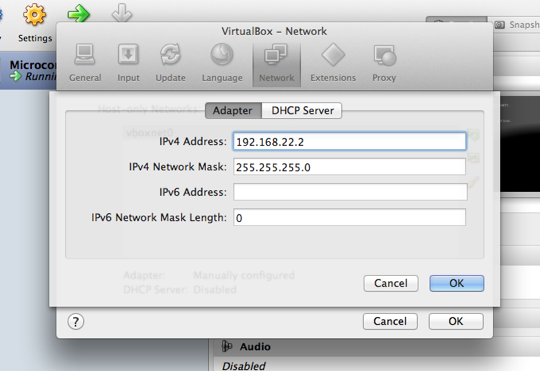 Now attach the Microcore ISO to the virtual appliance by clicking the “Storage” section of the VirtualBox VM settings, then selecting the CD item underneath “IDE Controller”, selecting “Choose a virtual CD/DVD disk file…”, and choosing the Microcore ISO. This lets us boot the VM into Microcore. 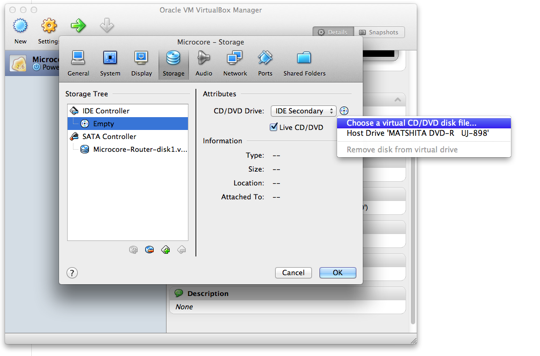 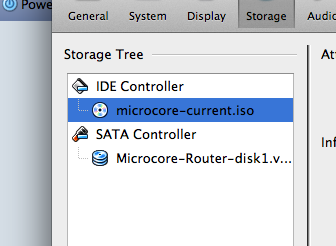 Finally, if you’re using a USB network device, plug it in now. Attach the network device to the VM by opening the “Ports” (or “USB”) settings, then clicking the USB “+” symbol and selecting the device.

Note: I’ve already added the RTL8187 device to the VM setup, so if you’ve got one too, you shouldn’t have to do anything here. 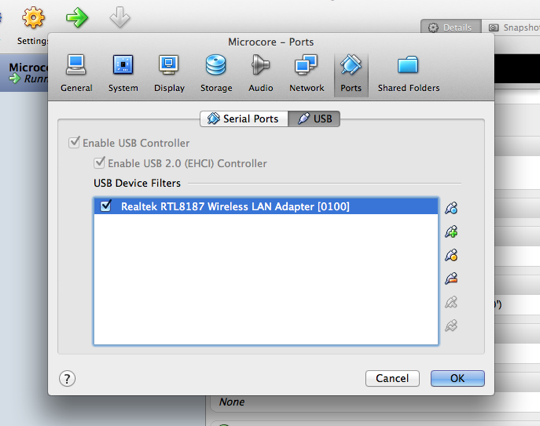 Now, you’re ready to boot. Close the settings window and hit “Start”. You should see the Microcore boot screen appear, with a prompt for boot options. 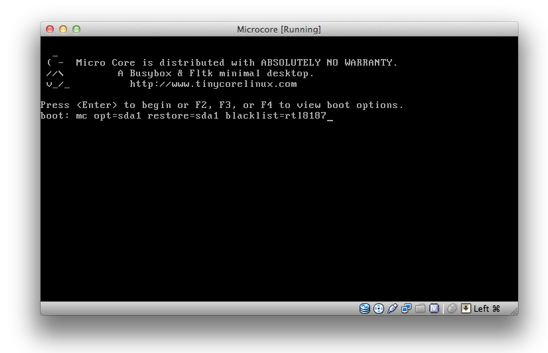 Type the following in, to make Microcore boot with the setup contained within the virtual appliance:

If you’re using an RTL8187 too, then you’ll want to blacklist the buggy Linux device driver here, so that ndiswrapper can run the device with the improved Windows drivers:

Hit enter to start booting, and within a few seconds you should be faced with an empty screen and a prompt.

With a bit of luck, your network device has been detected and started up; type wicd-curses and hit enter to launch the WiFi control panel. 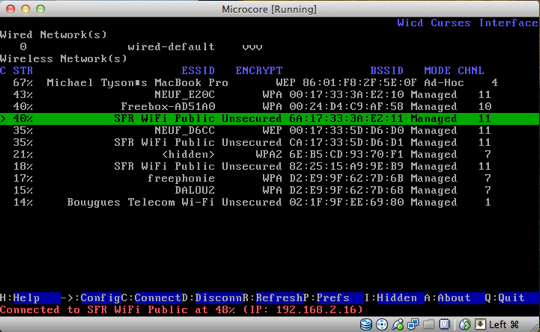 If you don’t see any networks here, and you expect to, then it could be that your network device hasn’t been picked up. Otherwise, breathe a sigh of relief and press on.

Now that we’re booted and running the VM, we need to set up your Mac to access the internet via the VM’s connection.

Minimise the VM window — we’re done for now — and open up a Terminal window on your Mac. Ping 192.168.22.1, which is the VM’s configured address. Do you see ping replies? Then you’re almost there.

The final step is to make your Mac use the guest’s DHCP server, to obtain the correct settings. Type the following in Terminal to make it happen:

To make sure it’s done the right thing, type ifconfig vboxnet0. You should see something like:

That is, the default address we specified when setting up the VirtualBox host adapter, and a new alias that has an address assigned by the DHCP server running within the VM. If you see this, then you should be good to go: Try opening up a web browser or pinging google.com.

For bonus points, you can set up your Mac so that other computers on your network can share the connection. It’s not as simple as just starting up Internet Sharing from System Preferences, however, because System Preferences doesn’t know about the virtual network device we’re using.

Instead, we have to do it the old-fashioned manual way: Set up IP forwarding, NAT, and set up a DHCP server. I’ve created a service (loosely based upon Schley Stauffer Andrew Kutz’s akin service) that monitors the VM’s network state, and automatically does all this, sharing the VM’s connection via Ethernet and Wi-Fi.

Extract, then go to the folder in Terminal and type:

This will install to /usr/local/vmboxnat, and register the service with launchctl. This is a script which runs in the background and starts up internet sharing when the VM is detected, then stops it when the VM goes away.

If you open up Console now, you should see something like:

That means you’re all set.

Note that you’ll need to manually create an ad-hoc WiFi network, as we can’t automatically create a network the way the official Internet Sharing system does. Once you’ve created it, though, other hosts accessing that network should automatically receive an address via DHCP, and be good to go.