The Making of Talkie: Broadcasting

Talkie is my newest product, the result of a collaboration with a good designer friend, Tim Churchward, who did the user interface.

Talkie is a little different from many of the other walkie talkie applications on the App Store (aside from the fact that much of it was written by me from our motorhome in Tunisia!), and I thought I’d write a little about some of the tech underpinning the app, and some of the choices we made. Along the way it may get a little tutorial-esque.

Right from the start, we wanted a product that brought back the fun walkie talkie experience we remember from our childhoods. I’m talking colourful plastic, whip antennas and hiding in tree-houses. This was mostly Tim’s domain, so I shall leave it to him to discuss how he found that in the user interface.

It also meant stepping back from traditional voice chat, with manual call initialisation and termination and simple one-to-one calls. We wanted to mimic a radio, so that meant broadcasting as soon as you hit “Talk” — whereupon anyone in the neighbourhood would hear you.

Basically, we wanted to get as close to the real thing as was practical. This included the addition of a prominent ‘morse code’ button, of course, as well as a ‘squelch’ control for ‘fine tuning’, which simulated the static of bad reception. 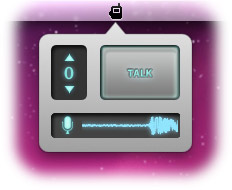 Soon after I started developing Talkie, I realised I wanted a version for the Mac too.

Having Talkie both on the iPhone and on the Mac made sense, as we envisioned that a fairly common usage pattern would involve communication between a desktop and a handheld — say, someone wandering a campus with the iPhone in their pocket, staying in touch with friends at their desks.

We wanted to offer good value with Talkie, which is why we made Talkie for Mac available for free, when it’s used with Talkie for iPhone.

One of the very convenient things about developing for both iPhone and Mac is that the platforms are so similar, porting code is usually effortless. So, going dual-platform was an easy decision.

Version 3.0 of the iPhone SDK introduced the GameKit framework and as part of it, GKVoiceChatService, which provides two person voice chat straight out of the box. Immediately it was clear that it wouldn’t serve our purposes — two person is not broadcast. I was also keen to provide a Mac version of Talkie, and given that GameKit is iPhone-only, it was time to go off the beaten track.

There are a variety of voice communication protocols out there, with varying licences and varying complexity and feature sets. I could’ve spent a week or two researching the options and evaluating them against our need for broadcast functionality, figuring out compilation and linking on the iPhone, resolving any compatibility or performance issues that arose, etc.

Or, I could spend a day putting together a few big building blocks provided by Apple (and the underlying Unix system) and have an easily tweakable working solution that precisely meets our needs and provides for future features.

It may not have been the most scientific approach, but the core of Talkie’s functionality was up and running on our home wi-fi network within about four hours, and it was working well.

Connection-oriented (a.k.a. ‘reliable’) communications are most common: They’re used when you open up a website, connect to iChat, or check your email. This is the TCP part of TCP/IP, and includes niceties like built-in guaranteed delivery via retransmission (providing your cat hasn’t eaten your network cable, of course) and packet ordering so you receive the messages in the right order. This only works between two computers, though – you and the server.

Connectionless (or ‘unreliable’) communications are much more open — it’s basically just a spray of messages: The data isn’t carefully ushered along, it’s just spat out and left to fend for itself. This is UDP, and is commonly used for time-sensitive applications like audio communication, network gaming, etc., where once a packet arrives late, it’s useless: No point mucking about re-sending lost data that’s going to be past its use-by date by the time it arrives. The other thing about UDP is that, because there’s no co-operation required from the destination (to acknowledge receipt, etc.), it lends itself to one-to-many communications — broadcast.

Just what we’re after.

So, we use connectionless communications (UDP) to send messages containing the audio, and anyone who receives them unpackages and plays the audio within.

The basic mechanics of this are fairly simple, once you get past the arguably cryptic C syntax.

Here’s how it works.

On the transmission end, on startup, you create a socket using the socket call:

The socket, identified by sock_fd, will be created using the IPv4 domain (AF_INET), a ‘datagram’ type (SOCK_DFRAM: that’s connectionless communication — if we wanted connection-oriented, we could put in SOCK_STREAM here instead), using protocol 0, which is IP.

Then, we enable broadcasting:

That is, we set the SO_BROADCAST option at the SOL_SOCKET level to 1 (via the flag variable, which we pass in as a pointer), thereby requesting permission from the operating system kernel to broadcast.

Now we have the carrier pigeon coop at our disposal, we can start dispatching pigeons. First, we fill out the address:

(Note, htons converts kPortNumber into a format that can be understood by any computer, regardless of the way it represents numbers internally.)

That takes care of outgoing messages. To receive them, we want another socket:

Now we specify where we want to receive messages from, by ‘binding’ the socket:

And we pass a buffer to recvfrom to fill up with tasty morsels of data:

Voila, we have bytes_received bytes sitting in buffer for us to do something with. Note also that addr now also contains the address of the sender. Now we can loop and continue to receive data as it comes in, passing the data off to some other part of the application to deal with.

We can put it all together into a simple test app: broadcast_sample.c

This will work happily between computers with just one network interface. But, if you have more than one (say, wireless, and an Ethernet connection too), you’ll notice that it will only communicate through one of the interfaces. That’s because just the default interface is used. You have to explicitly attend to each interface, to broadcast out of each one, and listen on each one.

In the next part of this series, I’ll write about how I addressed that, and about multicast, which is used in things like Bonjour (MDNS). I’ll also write about designing packet formats.